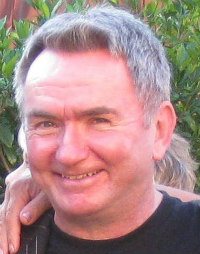 Ed, after a valiant health battle, sadly passed over on Monday 7th October 2019. Ed was one of Australia’s leading astrologers unrivalled in his practice of Mundane Astrology and predictive techniques. Ed introduced astrology into countless people’s lives with accuracy and care when he was co-hosting a top rating evening radio show over many years.

Ed lectured at FAA Conferences, taught astrology, in a joint venture with his life-partner Sherrynne Dalby, at the Sirius School of Astrology and encouraged and supported budding astrologers to be the best they could be. He wrote the ‘Eye in the Sky’ quarterly column for the FAA Journal and I know that FAA members looked forward to reading his insights into world events, people in the public eye and politics. His astrological work stands as testament to his knowledge, wisdom and his skills that he shared so generously with others. Ed lectured across Australia to many FAA Associations and other groups, consistently wrote his astute website predictions and articles and posted regularly on his Facebook page.

Regardless of all his accomplishments Ed was an unassuming person with a wonderful, and frequently cheeky, sense of humour. He quickly put others at ease with his warmth, genuine interest in them, his brilliant conversational skills and he was always up for a chat. Ed enjoyed strumming his guitar while he shared a song and being with family and his friends who will all sadly miss him.

Deepest condolences to Sherrynne Dalby, Ed’s partner who cared for him tirelessly throughout his battle with cancer and to all their family. Ed you will be greatly missed by family, friends and the astrological community. May you rest gently among the stars and keep shining your warmth and brilliance down on the world.

It is with much sadness that I write about the passing of a close friend and a great astrologer, Ed Tamplin.

Together Ed and Sherrynne Dalby ran the Sirius School of Astrology, at which many accomplished astrologers first encountered the foundation principles of astrology and later became successful practitioners in their own right.

Ed and Sherrynne were also very involved in the (FAA) at different levels of the organisation on various occasions. Ed spoke at many FAA conferences and presented his research at other state affiliated branches, as well as the local Sydney Astrological Research Society (SARS). His earlier life experience as a ‘radio jock’ prepared him well for public presentations.

Ed Tamplin’s presentations were always meticulous, well organised and researched. Ed was an astute observer of politics, both at home and abroad, and his capacity for research and his memory for detail set him apart from many of his colleagues. He was not afraid to pick up the phone and speak directly to political leaders in Australia and ask for their birth details.

Ed Tamplin’s web site: edtamplin.com is a treasure trove of astrological information.
Ed is particularly known for his “Eye in the Sky” regular column in the FAA Journal. For 7-8 years while I was still editor, Ed was a regular contributor, never missing an edition. Neither has he missed an edition since Judy Best took over as editor. Ed’s specialty was mundane (political) astrology. His capacity to be objective in his astrological assessments, without political bias, provides an excellent for others to follow.

Ed and Sherrynne spent time with us at our home on the Bellarine Peninsula and I enjoyed their company over the occasional glass of wine and a stroll on the surf beach at Ocean Grove. I knew Ed as someone with a good sense of humour and an excellent conversationalist. While he commanded respect he would understate his accomplishments and conduct himself with humility. He was sensitive to the needs of others and would go out of his way to first seek to understand the needs and opinions of others before offering an opinion himself.

At his funeral I met some of his friends and was struck by the high regard they held for him. They included fellow musicians, childhood friends and co-workers from his days working in the radio industry. Ed’s generosity compassion and warmth were well known to those who had the good fortune to be associated with him.

Ed Tamplin’s horoscope reflects many of the characteristics which defined him in real life. These include the Taurus ascendant, showing a steady, determined and un-rushed approach. He was born on a full Moon and a Sun-Mars conjunction in Cancer, showing his sensitivity, compassion, as well as his courage. There is of course much to say about his horoscope, but this is not the moment. At his passing his natal Moon was receiving an exact solar transit by square, and Saturn, the planet of closure, was conjunct his natal Moon.

Farewell to a great man and excellent astrologer